The day started with heading down to the two parks near the Belgrade railway station where the refugees are situated.  They are two small parks where a strange co-existence of both refugees and locals during the day sit and relax in the park…  During days like today when the temperature is over 30degrees C, it somehow doesn’t look so bad; the refugees like the locals sit, and relax in the sun.  From a distance you would think they are all just sitting there on blankets maybe having a picnic.  But it’s when you enter the park; you see and smell the reality.

Like many of the refugee sites and camps I’ve been to that were I suppose unofficial and not run by the likes of local government and UNHCR etc, there is an instant smell, a smell I recognise from my days of travelling & leading expeditions through third world countries, the smell of the shanty towns of India and African Nations like Botswana, Zimbabwe and Zambia etc.

Of course the borders are shut and have been for some time now across Europe and on top of this the recent EU-Turkey Agreement have stagnated groups of refugees in countries across Europe from the Mainland of Greece to Germany, but it hasn’t stopped more and more finding a way to cross the borders.  Even with the tightened security in the Aegean Sea between Turkey and Lesvos has not totally stopped the flow of refugees trying to get to Europe via Lesvos/Greece.  Today’s statistics from the UNHCR in Lesvos state that approx 82 make it on average per day (April statistics), that’s 1-2 boats full of refugees.  Now that may seem very low compared to when I was there in February and March where an average of 500-800 were arriving per day, but that doesn’t mean that the refugees have stopped trying to move across Europe.  They have found another route, crossing land instead of sea via Bulgaria and into Serbia.  Today 70 refugees made it to Belgrade.  This makes an estimate of 450 refugees now in Belgrade.

For many, the journey across Europe has haltered due to money, with the borders shutting and the EU-Turkey Agreement, the refugees have more and more relied on smugglers to help them cross each and every border, costing thousands of Euros.  For the lucky few that do have some money left, the smugglers operate overtly in the two parks where the refugees are by the small cafe area in the corner of the main park where most of the refugees sleep.  You see them encircled by refugees, taking money and on the phone to their contacts; it’s like watching ticket touts at a football stadium.

After visiting the parks, I went to an area called Little Camp, it’s not really a camp in the sense that refugees sleep there.  It’s just a small compound where refugees can come to relax in safety and away from the public.  Much of this area is funded by grants from the Norwegian Embassy, but is also funded from grants from all over.  In the compound they can get hot drinks, food, and clothing.  They can charge their phones and there are even 5 showers to use. 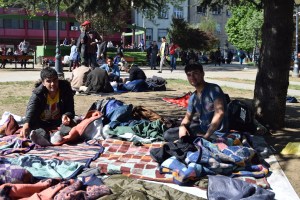 Whilst I was in the compound I met a guy from Afghanistan, I won’t give his name as he asked me not to and I didn’t take his photo, but his story was one of dismay in our UK Government, now Im a Tory supporter and always will be.  This isn’t a Tory lead policy, not even the Labour Party did anything or would do anything now.  We as part of a NATO US lead coalition went into Afghanistan, taking on the Taliban and when we felt like it we just up sticks and left this country that wasn’t even remotely stable and able to govern and protect itself, so what happened when we left? The Taliban walked straight back in! Now in many areas of Afghanistan the situation is worse than before we even went there, and instead of helping and protecting the brave Afghans that stood side by side with our soldiers as translators and other support staff by offering asylum in the UK, we have left them, forgotten them! These guys risked their lives just as much as our soldier, but unlike our soldiers who were able to leave and come back to the UK, the Afghan translators were left to the Taliban to walk right back in and take revenge! Many that helped the coalition troops on the ground have been singled out by the Taliban and killed, beaten.  They helped us and we just disgarded them like rubbish!

I will in a separate article tell this brave guy’s story as it’s a story well worth telling and reading.

Finally after the visit to the Little Camp, I went next door to the No Borders Hostel…  Believe me though this is no Hostel, this is a dilapidated, falling apart rubble of a building; the only bonus is that at least its shelter from the rain.  Walking inside I was greeted by one of the refugees who wanted to give me a tour of the place and welcomed me to sit and chat with the small group that were sat chatting.

It’s very apparent talking to many of the refugees that even with the EU-Turkey Agreement, they are as determined as ever to make it to Western Europe and find safety and salvation.  All of them had made their way to Serbia from Turkey via Bulgaria over a mountain range that they have all called the jungle.  Since hearing about this route, I’m thinking of trekking this route backwards from Serbia myself, as I’ve heard so many horror stories of local criminal gangs beating the refugees.  One guy who had bruises still over his body explained how 8 men attacked him and beat him to the ground.  I’m hearing also many stories of police brutality against the refugees including setting the dogs on them.