I will start with a few thoughts about the current refugee crisis, particularly on the Greek/Macedonia Border.  The repercussions of Macedonia are very much now showing here on the island of Lesvos!!!  Kara Tepe camp where I am based with HSA (Humanitarian Support Agency) has a capacity of approximately 1500 refugees, but at last count when I left the camp tonight was at 2100 refugees.  The Greek Municipal who is in charge of the camp called an emergency and a large number of tents were brought in to give shelter to all refugees.  I assisted with International Rescue with putting up the emergency tents for the large influx of refugees coming across from Turkey.

The problem currently isn’t that there are too many refugees arriving, the problem is with the Macedonian government closing the Macedonia/Greek border and the Greek central government having to cap the numbers of refugees boarding the ferry each day from Lesvos to Athens, which is now causing a serious bottleneck where every day nearly 2000 refugees arrive in Lesvos by sea from Turkey.  So we here on Lesvos are receiving more refugees each day than are leaving for Athens each day.

This is very much an unsustainable problem that is close to getting out of control unless Macedonia opens their border again.  There are now at time of writing this 16,000 refugees on the Greek/Macedonia border with approximately 1000 more arriving every day. 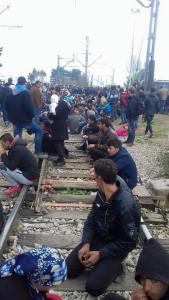 Back at camp, HSA has been asked to put on night duties patrols of the camp from 10pm till 6am by the Greek officials in charge of the camp which I’ve volunteered to do which suits me as I after a little sleep have the whole day to do my own thing preparing for Serbia, the next part of My Refugee Journey.  I’ve already been in contact with various groups, individuals and NGOs in Serbia such as Refugee Aid Serbia based out of Belgrade who I will be meeting up with once I get into the country.

I’m looking forward to getting to Serbia; it’s a fascinating country born from the breakup of the former Yugoslavia and was the aggressor in the Balkans where many atrocities were committed including the ethnic cleansing of Muslims in Croatia, Bosnia and Kosovo back in the 1990s.

Serbia now is quite a different country, it has tried I think to put the past behind it and show that it can be a member of Europe and the Serbian Prime Minister Aleksandar Vucic has come across on news that I saw before coming out here that he wanted to help with the refugee crisis and not cause more distress to the refugees, though since being out here in Lesvos with very limited access to news its almost been like being in a bubble not seeing what the outside world are saying about the crisis I am currently right in the middle of here in Lesvos.  So my next step on My Refugee Journey is going to be interesting.