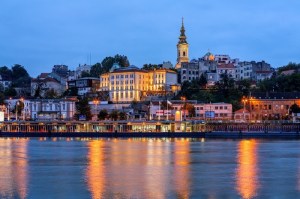 It’s just a few days now before I head out to Serbia on the next part of ‘My Refugee Journey’ and I can’t help but think about the country and its recent history and the backlash Serbia has continued to this very day to receive.  I’m a former British who served through the 90s when war was going on throughout the Balkans.  Our media showed the horrific atrocities that Serbian forces were committing but never did it show the atrocities that Bosnian and Kosovo forces were committing.

Heading to a country with such a recent history, I decided to look more in depth of what happened after the breakup of Yugoslavia, especially after the recent news of Radovan Karadzic.  This month saw a 40-year sentence was handed down to former Bosnian-Serb President Radovan Karadzic for crimes against humanity and his part in the bloody Balkan wars that tore across the former Yugoslavia.  Karadzic is the most senior Serb leader to be convicted for these crimes.  In preparation of going to Serbia I’ve been chatting to a number of people who I will end up meeting during my time in Serbia and have received quite a divided opinion with no real grey area in the middle.  Some very nationalist people have come out in outrage against the decision of The Hague to convict Karadzic, whilst others who would rather forget the bloody past of the 90s are happy with the conviction and want to show a very humanitarian Serbia.

But one thing I have found with both viewpoints is that all are very patriotic of their country. The national elections in Serbia are coming up whilst I’m in Serbia, and whilst many have been wanting to shrug off the countries bloody past and join the EU, there are those who want to see Serbia form a union with Russia and with another prominent figure who was recently tried at The Hague and found innocent, Vojislav Seselj.  Seselj is a member of the radical party who want to forge a union with Russia.  The party currently poll at 5%, but Seselj believes that with his acquittal the Radical Party stand to win 25% at the elections on 24th April.

There is no denying that Serbian forces were responsible for some of the most horrific war crimes against humanity that Europe has seen since WW2, but history seems to have forgotten the crimes against humanity that the likes of Naser Oric who became known as the ‘Defender of Srebrenica’.  The Western media seemed to not just forget but actually totally ignore others like Oric commit atrocities that should have been made known to the world.  Atrocities like the attacks on Kravice, a Bosnian Serb village which was destroyed by Muslim forces lead by Oric on the Serbian calendar Christmas Day (7th January 1993) and left 49 villagers dead.  One of the villagers was later interviewed and expanded how he was tortured of a month which destroyed his hip.  After a month in a prisoner exchange this Bosnian Serb along with one other were released, but the fate of the other six villagers was never to be known as they disappeared without a trace.  There was also evidence of executions by the Muslim forces under Oric’s command where people had been handcuffed and shot.  Many Muslims had also come from the Middle East to fight alongside their Balkan Muslim brothers, these foreign fighters formed the Bosanski mudžahedini (Mujahideen).

After the war, several were linked to terrorism, although no foreign fighter was prosecuted for war crimes, the foreign unit was linked to several atrocities and a number of Bosnian commanders in overall charge of the foreign unit were indicated under command responsibility.  Even the US were linked to the ethnic moving of over 200,000 Serbs from Croatia, where the US gave logistical and technical support.  Serbia has been demonised ever since the wars in the Balkans and all because they have regularly got in the way of the western political ambitions of the Balkan region.  It was post Cold War, and the west did not want a strong independent socialist state on its doorstep, a view that was later admitted by former Yugoslavia US State Department desk officer George Kenney. The West wanted smaller, more manageable weaker States.  Serbia had most to lose from the breakup off Yugoslavia.

In October 1991 the leaders of the six Yugoslav republics convened on The Hague for a meeting and were presented with a document “The End of Yugoslavia From The International Scene” by the European Community.  The Serbian leader Slobodan Milosevic alone refused to sign the document.  The West’s political objectives meant that they would side with The Kosovo Liberation Army, a group named as terrorists by the US State Department.  Even after the Dayton Agreement brought an end to the conflict in Bosnia in November 1995, Serbia was still vilified and blamed for the conflict but actually the man responsible for the breakout of war in Bosnia was US Ambassador Warren Zimmerman, who persuaded Alija Izetbegovic a Bosnian separatist to go back on his signing of the 1992 Lisbon Agreement which would have given peace to the region, formerly Yugoslavia.

It is estimated that there are over 500,000 Bosnian Serb refugees from the conflicts in former Yugoslavia. I’ve not written this to play down the atrocities that were committed by the Serb forces, but as a note that it wasn’t just Serbs that committed these war crimes, both sides committed horrific atrocities and so it’s about time we in the west stopped attacking Serbia and come together in peace as one Europe united and not divided by the past.  If we can forgive and live alongside Germany who was responsible for two world wars then we can live as friends with Serbia also.